I was particularly struck by this line:

This particular group of works were somehow sort of the the icons of eccentricities and exceptional in the sense that they didn’t fit into the art world at that time.

I did them to see how far  you could push an object and yet it still mean something.

The first question I ask myself when something doesn’t seem to be beautiful is why do I think it’s not beautiful. And very shortly you discover that there is no reason.

There is, of course, a difference between “meaning” and “beauty,” but I believe there is a connection in attitude between these quotes. For Cage the thing under consideration can be beautiful through the attitude of the viewer. Rauschenberg is talking about daring to present something perhaps “eccentric and exceptional” to test the possibility that there is not only “beauty” for those with the right attitude, but also “meaning.” Finding pleasure in the viewing is an experience of  “beauty,” while sparking thought (which might or might not include the verbal) or a “gut level” reaction (thats a kind of thought, too), has meaning.

While at the Residency looking through the dozens of books, I was struck again by Rauschenberg’s Cardboards series from the early 70s.

This series is essentially constructed from found cardboard boxes. I probably became aware of them right around the time I left college (1972). Must have seen Small Turtle Bowl when I went to San Francisco in 1977 to see the Rauschenberg retrospective, but I don’t remember it.

What strikes me now is the difference between the artist who made work in his early twenties to,”see how far  you could push an object and yet it still mean something,” and the artist in his mid-forties who chose to select some of the most modest remnants of our culture to present, with seemingly little modification (well, a lot of extra staples on the left side above), in the context of art. In these I detect  a sureness of knowing that these works would succeed with meaning. (However, they seem to have had less success with gallery sales according to Mary Lynn Kotz in her excellent biography of Rauschenberg.)

In design there is the concept of using poor materials richly or rich materials poorly. In the early 50s Rauschenberg had made paintings with gold leaf and with dirt, testing the possible “art” difference between the rich and poor materials—is there more meaning in gold than in dirt?. (BTW, you know, expensive oil paint is just “dirt” and oil.)

In the cardboard works Rauschenberg takes poor materials and assembles them to have dignity. Sure, he used a lot of used materials before and after, but with a lot of those remnants there is the possibility of feeling that the material previously had an important use—the bicycle had been ridden, the bed had been slept in, the crumpled metal came from some once really useful object, the goat once walked the earth. But these boxes were just the things the important stuff came in.

Again Rauschenberg asked the viewer to take notice of the real world.

Somewhat of a digression, but related:

I heard that Bill de Kooning had said about Leo [Castelli], with whom he was annoyed over something, “That son of a bitch, you can give him two beer cans, and he could sell them.”

At that time I had made a couple of sculptures. I’d made one or two of a flashlight and one or two of a lightbulb. They were small objects, sort of ordinary objects. When I heard the story I thought, “What a fantastic sculpture for me. I mean, really, it’s just absolutely perfect.”

So I made the work. It fit in perfectly with what I was doing. I did it, and Leo sold it. [Johns laughs uproariously.] 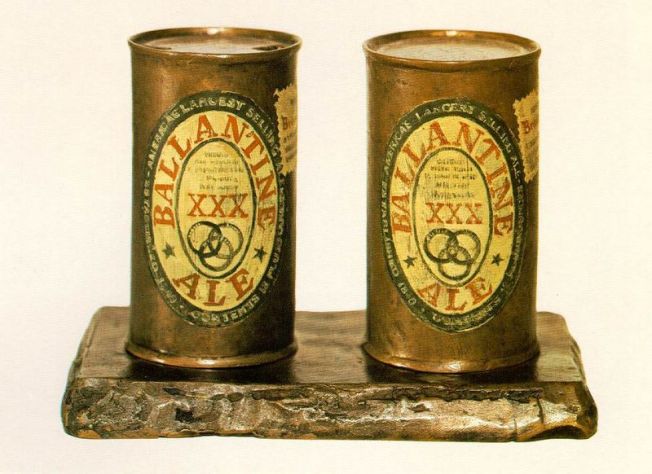 These are common objects reproduced, not actual cans. Made of more precious metal than the original cans. Bronze signifies “art.”

Rauschenberg’s use of cardboard reminds me of the Japanese concepts of wabi and sabi. According to our friend Wikipedia:

Wabi-sabi (佗寂?) represents a comprehensive Japanese world view or aesthetic centered on the acceptance of transience and imperfection. The aesthetic is sometimes described as one of beauty that is “imperfect, impermanent, and incomplete”.

And as Daisetz. T. Suzuki says in Zen and Japanese Culture, “Wabi really means ‘poverty,’ or, negatively, ‘not to be in the fashionable society of the time’.”  Suzuki also points out that, “This has been one of the tricks of Japanese artists—to embody beauty in a form of imperfection or even of ugliness.”  The beauty of imperfection, or the beauty of ugliness. Or as Cage says above, there is no reason that anything is not beautiful.

So, Rauschenberg’s rescue (reuse, recycling) of these poor, far from perfect, cardboards might be considered as a demonstration of the idea that anything, well presented (and that is important!), can be meaningful, and beautiful.

And these pieces of cardboard were pushed further in multiples such as  Cardbird door, 1971: 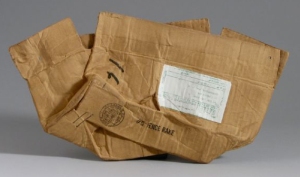 Clay is the most modest of all classic sculpture materials. I enjoy this thinking which must be something like,”What can we make with all the technical resources of contemporary clay sculpture? I know, how about an old crushed cardboard box???!”

I feel that Rauschenberg had gotten to a point where he knew that very little needed to be done with a material, an object, a subject, in order for it to have some meaning. How much meaning? I’m thinking that that could be a point (not necessarily Rauschenberg’s conscious point, but a point that I’m feeling)—maybe a little bit of meaning, a teaser of meaning, is enough meaning to get us to connect—with the artwork, with the world, with a random cardboard box sitting on the floor once in a while. The Cardboards/Cardbirds/Clay pieces, even when they are large, might just be etudes, not symphonies.

PS: In transformation from one material to another I saw this piece (or one similar, evidently there are variations) over 30 years ago and in terms of modest subject to rich materials this takes the cake: 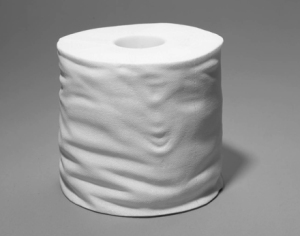 What about Marcel Duchamp? I don’t find Duchamp relevant to Rauschenberg’s work in general. Certainly Rauschenberg knew Duchamp. But there is a difference in attitude between Duchamp and Cage. Cage said,”Beauty is now underfoot wherever we take the trouble to look.” Duchamp’s attitude was more of  “it’s art if I say so.” Rauschenberg wasn’t trying to see if cardboard could be art, but rather how to make art with cardboard.

This kinda relates to the quote in the beginning, but it is 25 years earlier. In Painters Painting Rauschenberg says:

I was the “charlatan” of the art world. Then, when I had enough work amassed, I became a “satirist”—a tricky word—of the art world, then “fine artist, but who could live with it?” And now, “We like your old things better.”