Recently I was talking with Alberta Mayo, founder of the Manitoba Museum of Finds Art, who gave me a membership card to her venerable institution.

If you had visited the waiting area of the directors’ offices at SFMOMA between 1975 and 1978, you would have encountered an exhibition not advertised on the museum’s official schedule: one of the 23 shows organized by Alberta Mayo under the auspices of the Manitoba Museum of Finds Art (MMOFA). Mayo, then assistant to Director Henry Hopkins and Deputy Director Michael McCone, directed her own museum within “the other museum,” turning her administrative space into the venue for a range of solo and group exhibitions by artists who — with a few exceptions, like Sol LeWitt — were largely under SFMOMA’s programming radar. http://openspace.sfmoma.org/2011/11/manitoba-museum/

I guess I should fill in my name.

I told Alberta that I had received a Master of Finds Art (MFA) from Lowell Darling in 1977. Our conversation led me to go to my file cabinet and dig out my diploma:

Darling was handing out diplomas at the Northwest Artists Workshop (that rose was a NWAW rubber stamp). According to Wikipedia:

Lowell Darling is an American conceptual artist most notable for a series of performances in the 1970s that included nailing cities to the earth, conducting “urban acupuncture” by placing oversize needles in the ground, and stitching up the San Andreas Fault. His art includes a run for public office in the 1978 California gubernatorial election, when his primary challenge to Governor Jerry Brown received some 62,000 votes.[1] He is the creator of the “Fat City School of Finds Art,” an unaccredited institution that grants free Masters and PhD degrees to arts students.[2]

According to one of the big department Heads, Dana Atchley, the school’s motto is ” We don’t makes art, we finds it!”
Legend has it that the inspiration to found this institution occured when Mr. Darling walked off the street into a hotel lobby and, before he could inquire as to the location of certain porcelain hardware of which he had an urgent need, a lady behind a card table covered with blank name tags asked, ” What college?”
Mr. Darling glanced around and saw a bar, buffet tables full of free food and a banner announcing a convention of college art departments. He said, “Fat City!”
The lady wrote it on a name tag, added his name, and pointed him in the direction of the facilities. The rest is history.
“Art in America” magazine names this conceptual, tuition-free art school as the largest in the nation.  It has over 50,000 alumni. There are no graduation requirements for the masters diploma from the Fat City School other than the graduation ceremony itself. No classes. No tests. No papers. No required exhibitions. No Nothing!
Simply step up, shake the hand of the granting Head with one hand and with your other, receive the handsome diploma suitable for framing. This certificate automatically confers on the recipient a tenured appointment to the faculty of the Fat City School of Finds Art. In fact, if the graduate so desires, they are promoted to Head of their own department, vested with full authority to graduate others and awarded a lifetime sabbatical leave.

Thus, the Fat City alumni have an advanced college degree, a job in which they are their own boss, and time to pursue what’s important. Making a living is one of the few life problems not immediately solved by this degree.  [http://www.jpallas.com/prekinetic/fat-city.html]

In the file folder I found my tuition receipt:

AND that I am a member of the fatculty! 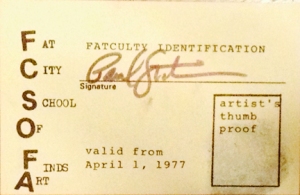 I also see now that I got all this on April Fool’s Day—just a coincidence, I think.

But as I recall, the buzz that evening was, from folks with transistor radios, that the Blazers had just made the playoffs! For the first time! And of course they went on to win the NBA championship.

One thought on “Getting my MFA”