Robert Irwin is one of my favorite artists.

When I was a student at Portland State back in the early 70s Mel Katz brought Irwin to PSU. He sat in the life drawing studio and talked for several hours. A few years later I saw one of his scrim installations at the Henry Gallery at the University of Washington. I thought it was amazing. He did a very minimal installation at Portland Center for the Visual Arts in 1978. As the art critic for Willamette Week at that time I had a nice conversation/interview with him at the Burger King that used to be at Burnside and Broadway.

Irwin is an artist whose attitudes about seeing have led me to be very conscious of everything within an artwork’s visual environment. He has always been very careful about how his work is installed. I believe that everything he does has “intention.” Everything has been considered and attended to.

So, for years I’ve been ticked off by the idiotic installation of one of his disc paintings at the Portland Art Museum. For me it amounts to vandalism.

In the late 1960s Irwin made a series of  paintings on round convex panels. With these works, according to Lawrence Wescher in his wonderful book on Irwin titled Seeing is Forgetting the Name of the Thing One Sees:

Irwin was trying to create a painting that would simply dissolve into its environment. And whereas some artists (including Irwin himself at an earlier period) had long been concerned with lighting—eager that it not distract from, indeed that it enhance the presence of the painted image—Irwin was now concerned with light itself as an integral part of the aesthetic moment.

Further on Weschler quotes John Coplans from the 1968 catalog for the exhibition of these works at the Pasadena Art Museum:

…each of Irwin’s new paintings is dependent on the use of its ground…a flat gray tinged wall approximately 12 feet high in a suitably sized room or gallery. The wall needs to be at least 12 feet wide, but if possible it should be wider…The disc is cross-lit from four corners by incandescent lamps (two in the ceiling and two in the floor, placed equidistant from each other and approximately six feet back from the wall)…and the effect of the cross-light is to cast a clearly discernible, symmetrical, but elaborate shadow  pattern of segments of a circle…The result of the cross illumination combined with the ambient light is the that the shadow, the disc and the outer area of the illumined wall are seen as an entirety. Thus the three elements—wall, shadow, and painted disc—are equally positive; the shadow, in fact , sometimes becomes almost more positive than the disc.

So this is how the installation of one of these pieces is supposed to look (perhaps a little too much contrast in the pic): 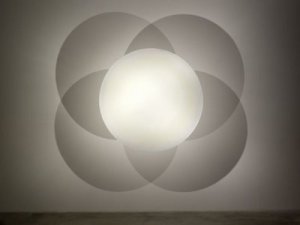 Or from a distance:

But at our Portland Art Museum the work is obviously misunderstood as “just another painting” and hung like just another everyday painting: 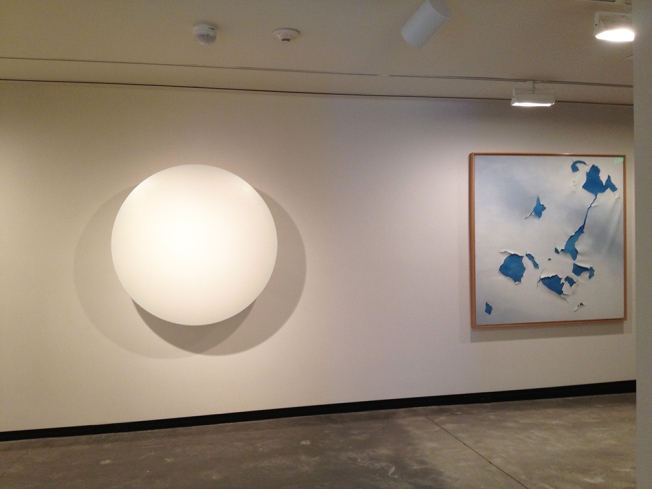 Perhaps they just don’t know any better. Perhaps nobody at the museum has every seen one of these Irwin disc paintings before, or flipped through Google images of Irwin’s work, or saw the original first installation of this work at the museum after it was acquired (it was given really nice space and lit correctly). Or maybe nobody from the museum was at this talk  at the museum by Ethan Rose:

Go to about 6:15 in the video where Rose says,”There’s a slight issue here in that this piece isn’t mounted exactly to Irwin’s specifications.” He goes on to discuss the lighting.

Weschler says,”Shown correctly, Irwin’s discs are otherworldly. They seem to float ambiguously. Is the disc seeming to dematerialize or the shadows taking on volume? There is an eerie, fluid sense of density, object and shadow playing in and out of copresence.”

Well, that can’t happen with this installation at PAM. For the viewer who doesn’t know better the installation is a lie about the work of Robert Irwin. How can one learn about contemporary art when they are shown a vandalized version?

According to our friend Wikipedia:

Since 2000 Bruce Guenther has served as the Chief Curator of the Portland Art Museum in Portland, Oregon as well as its curator of contemporary art.…In addition to administrative duties, Guenther is responsible for initiating and planning all exhibitions and permanent collection presentations of modern and contemporary art.

I’d be disappointed if he wasn’t aware enough to know about Robert Irwin’s intentions with his disc paintings.

But that must be the case because I just don’t see how one could ethically knowingly misrepresent the work of any artist.