Shutters for windows serve a couple utilitarian functions. One is to protect the windows from flying storm debris. Another is to provide privacy, security and ventilation when the windows themselves are open. In order to do this the shutters are hinged so that they can open and close, and they are made to fit the window opening tightly. 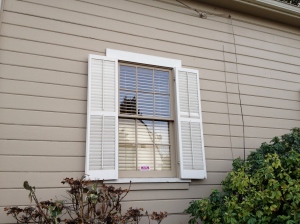 Nowadays there is another function: decoration. And, perhaps nostalgia. The function that required hinging seems to have been lost, and the original link between form and function is lost.

In some cases this decorative function—separated from the protective functions requiring hinging— seems to part of the original design of the house. 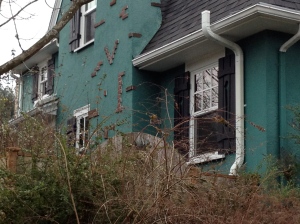 But then there are the most common examples where store bought shutters are tacked onto houses in ill fitting ways.

And there are those that can’t be explained by any understanding of shutter utilitarian function: 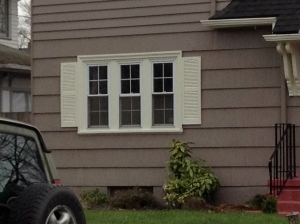 I’ve come to believe that this is an example of what the Roman philosopher/statesman Cicero was talking about over 2,000 years ago:

In the estimation of poems, paintings, and a great many other works of art… ordinary people enjoy and praise things that do not deserve praise. The reason for this, I suppose, is that those productions have some point of excellence which catches the fancy of the uneducated, because these have not the ability to discover the points of weakness in any particular piece of work before them. And so, when they are instructed by experts, they readily abandon their former opinion.  (from On Duties)

People are looking for some sign of a link to older american architecture. This may not be the “point of excellence” that Cicero refers to, but it is a sign of meaningfulness—though misunderstood.

If you have a garden and a library, you have everything you need.