The point was clearly noted by Chloe Eudaly who said, “I’ve wondered about that very painting! Not being familiar with the artist I have to say that I’ve found it pretty confounding. I’d love to see it properly installed!” Indeed, seems to me that the point of being an art museum should be to educate, not to confound.

The mis-installation of art is rarely as big a problem as the outright lie of the Irwin installation, but the contemporary galleries have several obvious examples of art installed in goofy (in the bad sense) ways. How is the installation important? The same way that a properly tuned piano is important to hearing a Beethoven sonata. We want the music to be in tune and well played. We want the art to be shown to its best advantage so that it can be most effectively received.

Jeff Jahn was kind enough to mention the Irwin post on PORT  (portlandart.net). He said, “It is true, that presentation of one of the best pieces in the collection IS horrendous (a hangover from the still overcrowded Buchanan era install that needs thinning and more sensitivity). Installed correctly (as it once was) it is a stunner.” He goes on to note, “The over-installed nature of most of the museum’s collection is a MAJOR drag on the reputation of an otherwise rapidly improving modern/contemporary program at PAM …Can we fix this? This sort of thing is what many design professionals in Portland consider a major turn-off at the museum. PAM’s Jubitz Center is due for a major reinstall.”

Jahn notes that the space is “overcrowded.” I agree. The galleries are difficult because contemporary art requires generous space. Given that there is little generosity in these awkward galleries crammed on the side of the old lodge building, extra effort needs to be made to allow the art to work effectively.

Here are a few problems:

The old painter’s saying is: Sculpture is something you trip over when you step back to look at a painting. Maybe the incident below is a sculptor’s revenge—Painting is the thing on the wall that serves as a backdrop for sculpture.

The big painting below, by Larry Poons,  is of the type that one should first be able to experience fully from a distance. Unfortunately the Michael Todd sculpture is within about seven feet of the painting.  (The photo is misleading. The painting is probably at least 15 feet wide.)

Dan Flavin’s work requires breathing room, a sense of space. Here is is crowded by the John McCracken* plank. (But note: At least all the fluorescent tubes are there and working!)

The space under the stairs might be a place for storage in a home, but not a site to display art. 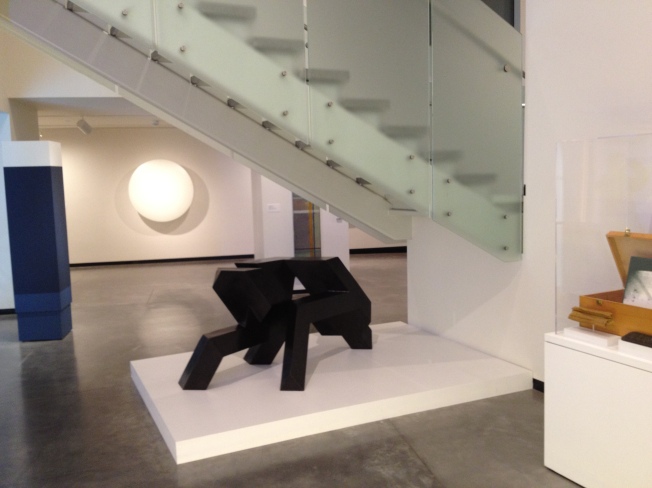 If you want someone to ignore something, change the subject. Don’t repeat the motif: 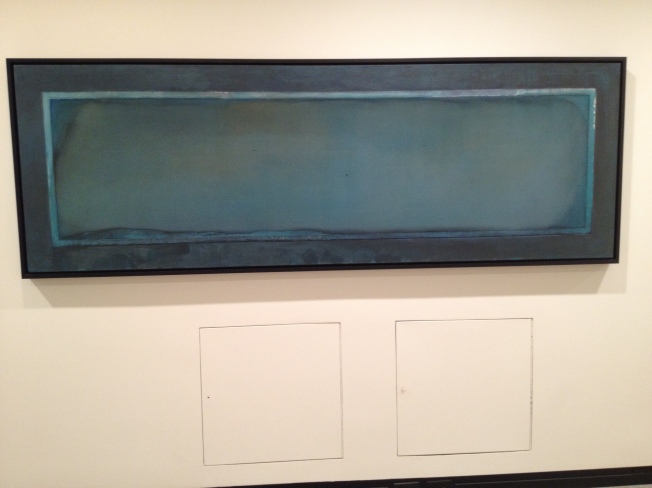 *One of John McCracken’s planks has my all time favorite title: There’s no reason not to

I also like DeKooning’s Rosy Fingered Dawn at Louse Point (and the painting itself is pretty nice, too).